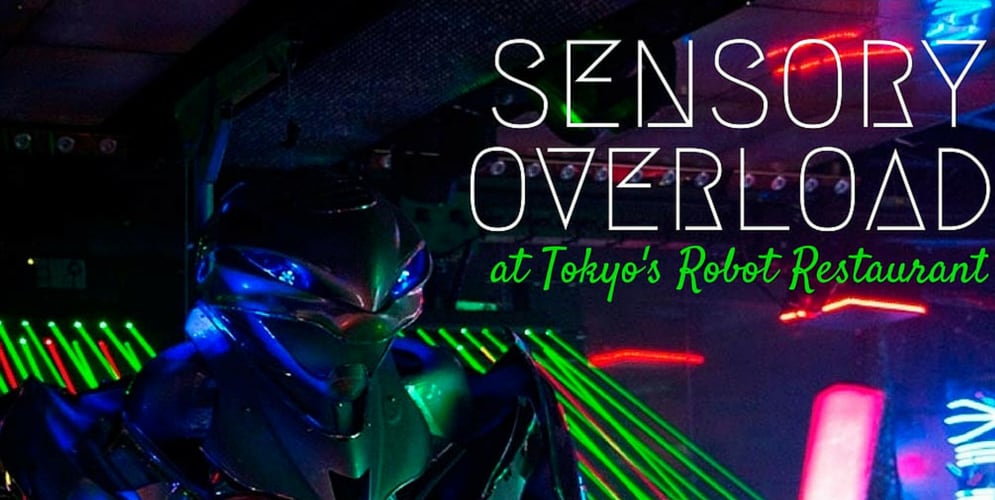 Rushing through the streets of the Kabukicho, I kept glancing at the time on my phone. I had a bad feeling that we were going to be late.

Blindly winding through the small alleyways, I had begun to regret my decision of not writing down directions. At this point, we could only hope that we were headed the right way.

Not being in the greatest area to stop and ask for directions, we spotted a convenience store and decided to head there. As we turned the corner, the whole street was flooded with bright neon lights and flashing LEDs. And I instantly knew that we had managed to find our way– and with just a few minutes to spare. There, tucked away in one of Tokyo’s most infamous neighborhoods was the Robot Restaurant.

Tokyo has long been known as an innovator in the technological world—especially when it comes to anything robotic. From robots that do mundane assembly line tasks to those who man ticket counters, Japan is certainly leading the robot revolution. But these robots, these robots are different.

The Robot Restaurant is not a restaurant where robots serve you food. No, here food takes a backseat to the eccentric entertainment that will engulf you. Here is a feast for your senses. It all started when we visited some friends in Tokyo last year. They went on and on about a show with larger than life fembots, bikini-clad girls fighting robots and beer. Lots of beer. It sounded beyond ridiculous, but I knew we needed to see this show.

Unfortunately for us it was our last night in Tokyo, so I was forced to put it in the back of my mind for a future visit.

Fast-forward one year later and finally, it was our turn. We touched down in Tokyo for a mere 3-night layover with only one activity planned— visiting, no, experiencing the Robot Restaurant.

As we arrived, we were led upstairs to an over the top waiting room. I’m talking floor to ceiling mirrors, crystal, and gold… anything that could reflect light and sparkle. We were taken to our table where a new friend awaited us—a tiny robotic dinosaur. Soaking up the atmosphere and glitzy environment, while we waited for the main event, a futuristic cabaret performance ensued. Then, the announcement was made. It was time to head downstairs for the show.

People funneled down multiple stories filled with childlike excitement. As we took our seats and the lights dimmed, our anticipation only grew stronger.

In what seemed like only a few minutes later, it had ended. It was like I didn’t know what hit me. I was left speechless and in awe. What had I just watched?

For the past hour I had been consumed by my senses and the mind-altering chaos around me. There were robots and half-naked taiko drummers and girls dangling from neon-lit airplanes. All of that was followed by roller skating robots with rainbow afros, fire-shooting pterodactyls, and let’s not forget the subtle Captain America and Kung-fu Panda references. Of course all of this was complete with animations on LED screens, synchronized lights, lasers and other fancy futuristic effects. This is Japan after all.

There were bits of traditional Japanese culture with taiko and kabuki elements entangled with the futuristic. Yet somehow it all worked together. As one scene quickly progressed into the next, it had me wondering if there was really any story at all. The randomness of it all was glorious, and I began to see why my friends raved about their experience.

And then the glow sticks were busted out. How can you not join in when glow sticks are involved? By this point in the show the whole audience was cheering for the bikini-clad girls to defeat the evil robots while waving their glow sticks in time with the beat.

I really don’t even want to talk more about the experience because I don’t want to give it away. Although, I don’t think I could explain it all even if I tried. It’s one of those places you need to see for yourself to believe.

So next time you go to Tokyo, why not give the Robot Restaurant a try? Between the crowd’s energy and the girl’s smiling faces, it’s a fun time for all involved. I promise you won’t regret it! WOULD YOU VISIT THE ECCENTRIC ROBOT RESTAURANT?