With over 29 rides and attractions to try and visit and 1.65 million square feet of land to explore, having only one day to spend in Warner Bros. World Abu Dhabi may not be enough to enjoy everything the theme park has to offer.

Located in Yas Island, Warner Bros. World Abu Dhabi is the most popular amusement park in the UAE that attracts thousands of tourists and locals of all ages every year.

As the world’s largest indoor theme park, there is a chance you might not have enough time to explore every nook and cranny of the place and try all its fantastic rides and attractions. 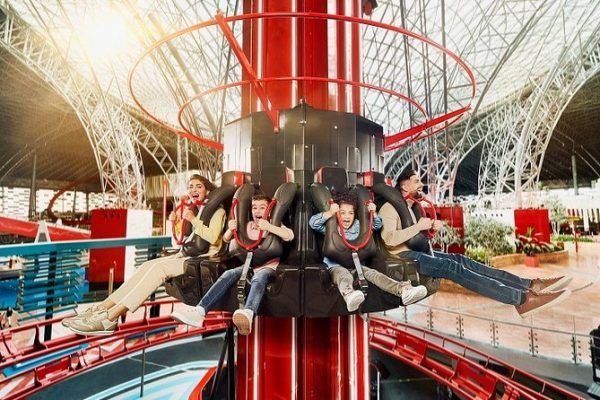 If you only have one day to spend in Warner Bros. World Abu Dhabi, below are the seven attractions and rides you have to make sure you visit and try first:

One of the most popular thrill-packed rides in Warner Bros. World Abu Dhabi, Batman: Knight Flight allows you to take part in one of the most exciting adventures of the Dark Knight.

Step into the Batcave and be a test pilot of the latest prototype of the Batmobile. You’ll then have command of the state-of-the-art tactical assault, pursuit, and capture vehicle to help Batman capture the Joker and his minions.

Batman: Knight Flight is a high-velocity ride that will take you through Gotham City. Its spins, rolls, and climbs will give you the thrill of your life.

Batman: Knight Flight is located in Gotham City, one of the seven zones of Warner Bros. World Abu Dhabi.

Go on an interstellar adventure with Hal Jordan and the rest of the Green Lantern Corps to protect the universe from evil beings.

Green Lantern: Galactic Odyssey is a 4D ride full of stunning sound effects and visuals that transport you to various astonishing worlds. The ride takes place in a 90-seat flying theater with an enormous 38-meter screen.

This immersive, experiential ride is so full of thrills that you have to be ready for anything that can happen at any second.

Green Lantern: Galactic Odyssey is part of several attractions at the Metropolis zone in the park.

If you want to team up with more superheroes, head to Justice League: Warworld Attacks to join Superman, Batman, the Flash, Green Lantern, Cyborg, Wonder Woman, and the other members of Justice League to fight their greatest enemies.

Justice League: Warworld Attacks is an immersive 5D ride. Guided by Cyborg, you’ll be transported to various DC locations to defeat an alien warrior army that aims to conquer the world.

The ride is full of spins, spills, and bumps, perfectly designed to give you a unique, exhilarating experience as you become a temporary member of the Justice League.

You can try this ride at the Metropolis zone of the theme park.

The Riddler Revolution is an interactive ride full of puzzles and tricks that takes you through Gotham City.

It is an exciting, spinning, rocking coaster with dizzying moments that can make your heart skip a beat.

With the Riddler in command, be ready to solve riddles while you’re on the tricky ride. 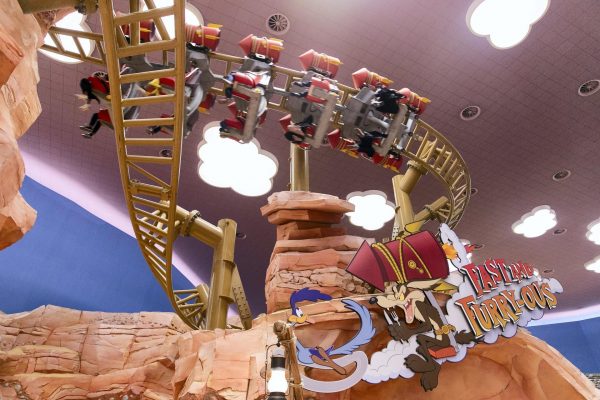 If you’re a huge fan of Looney Tunes, you shouldn’t skip the Fast and Furry-ous.

The Fast and Furry-ous is an inverted roller coaster ride that takes you through an adrenaline-pumping racetrack set in the picturesque desert landscape of Southwest America.

The ride is full of visual gags, thrilling tight turns, exciting high dunes, and other features that will keep you entertained and glued to your seat.

The Fast and Furry-ous is designed to let you join the exciting yet wacky adventures of Wile E. Coyote and the Road Runner. Because of this, it is one of the most popular theme park rides in the park and the UAE.

The Fast and Furry-ous is located in Dynamite Gulch, which also features other attractions, such as The Jetsons Cosmic Orbiter and Yosemite Sam Rootin’ Tootin’ Gas.

6. Scooby-Doo: The Museum of Mysteries

At this attraction, you’ll have to work with the Scooby gang to get out of the Museum of Mysteries.

Hop aboard the Mystery Machine with Scooby, Shaggy, Fred, and the rest of the gang to find a way out of the spooky, soon-to-be-closed museum.

Throughout the adventure, be on the lookout for clues that will help you navigate and get out of the museum safely.

You will find this thrilling attraction at Cartoon Junction.

Hang out with Fred, Wilma, Barney, Betty, and the rest of the Flintstones gang on The Flintstones: Bedrock River Adventure

Go on a scenic boat tour of Bedrock with its most famous residents. However, don’t expect a relaxing journey. Be on the lookout for a dinosaur ready to cause trouble.

The Flintstones: Bedrock River Adventure is a fun, refreshing way to end your visit to Warner Bros. World Abu Dhabi. Take the hint and be prepared to get drenched when you go on this ride.

Head to Bedrock to go on this family-friendly exciting ride.

Warner Bros. World Abu Dhabi is not just one of the best places to visit on Yas Island. The island is also home to Ferrari World Abu Dhabi, Yas Marina Circuit, Yas Waterworld, and other places that feature a myriad of amazing things to do in Abu Dhabi.

And if you want to get the most from your day trip to Warner Bros. World Abu Dhabi, head to these seven rides and attractions first. You won’t regret it.