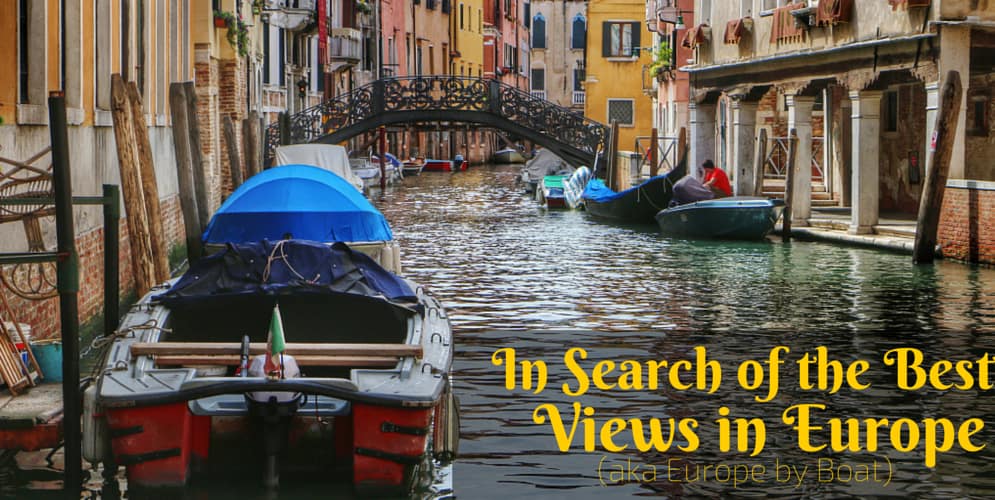 When I was younger, my family had a boat but I honestly never thought too much about it.

Sure, as soon as it was warm enough in summer we’d take it out on Lake Michigan, but I didn’t love or hate being on it– I was always pretty indifferent.

I guess it’s true that people take things for granted, because while that boat is now long gone, I’ve now come to love spending time out on the water and wish we had another boat.

Traveling around Asia, boats became a normal part of travel for me. Taking the ferry back and forth from Hong Kong Island to Kowloon or island hopping in Thailand and the Maldives– it was just standard every day transportation for island nations. I expected that.

What I didn’t expect however, was just how much time I’d be spending on boats in Europe.

Our itinerary consisted of mainly landlocked cities, so the thought of touring Europe by boat didn’t even cross my mind. Yet somehow, in nearly every country we visited, we found ourselves on a boat at least once.

And you know what? The more we explored Europe by boat, the more I realized the best views really and truly are from the water no matter where you are in the world.

Maybe it’s because I’m obsessed with good skylines and architecture, but to me, there’s just something so special and memorable about discovering a city by boat.

I guess as a photographer, it tends to give you new and unique perspectives to a city. Suddenly you may notice things you that never would’ve exploring by foot.

So as we continued to hop around from one European city to the next, even with our packed schedule I made sure to find time to squeeze in a boat ride or two in every new destination.

Here’s a look at some of my photographs taken while on boats around Europe. Can you see why I love exploring cities this way?

London was one of the cities I certainly didn’t expect to take in from the water. After all, we only had one night there, which meant there would be no time for leisurely boat rides– or so I thought.

Upon being offered a trip down the Thames River, we jumped on the chance and used that as our transportation to get from the Tower Bridge to Big Ben! While I had no desire to go up to Eiffel Tower, my main goals in Paris involved finding the most picturesque views of the city in order to show off the Eiffel Tower. I was convinced those views would be from Tour Montparnasse 56, and braved the crowds there are sunset.

Yes, those views ended up being wonderful, but I think my favorite views of the city were actually from a last minute boat ride we decided to take at sunset the following day. Amsterdam was actually one of the few cities I expected to explore via boat– I mean, c’mon… canals! Most people take the milk trains between little cities along the Rhine, but we decided we were in it for the long haul as we slowly made our way down the Rhine by boat.

Sure, it took us quite literally all day in the rain, but seeing those fairytale-like towns and castles was totally worth it! We didn’t know one of our tours around Prague came with a boat ride, but we happily accepted!

As we toured along under the famous Charles Bridge, I loved the unique views of Prague Castle in the distance. We decided to head to Bratislava by catamaran down the Danube as a day trip from Vienna. The river unfortunately wasn’t as blue as some waltzes claim, but it did provide beautiful views of Bratislava as we entered the city. Ah, Venice… a city famous for its beautiful canals! Venice was the only other city besides Amsterdam that we knew we’d be exploring by boat.

Although we never did make it on a gondola ride, we found that riding around the vaporetto all day gave us equally as nice of views– and for a fraction of the price! Cinque Terre is known for it’s adorable seaside villages, and I loved photographing them as I hike along the cliffside paths. However, when we hopped on a local ferry, we were rewarded with even better views of these colorful little towns. Throughout my travels I’ve found myself again and again on countless boat rides. Even outside of Europe, I’d argue that the best way to see most cities is still from the water. Don’t you agree?