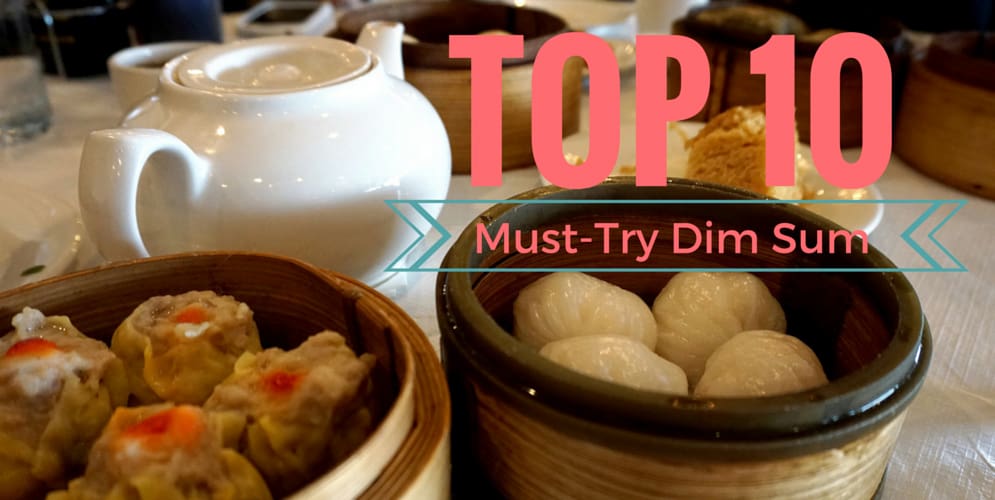 Most people in the US, have no idea what dim sum actually is or the etiquette behind it. It’s fun to watch their eyes glaze over at the million tapas-like choices laid out before them.

Smiling and nodding as they look over the menu — as though anything you pick it fine by them — you can visibly watch as the overwhelmed feeling washes over them.

Dim sum in fact, can be quite overwhelming! Add in menus with limited English, rowdy Chinese families shouting all around, and people spitting bones out on the table, it’s definitely not an experience most Westerners are accustomed to.

But I love it.

Going to grab dim sum on a Sunday morning quickly became one of my favorite rituals in Hong Kong, and one I still try to fit in at least once a month here in Chicago. So to help spread that love I’ve decided to outline my favorite dim sum items, in hopes that you’ll be more confident in ordering and will want to go give dim sum a try!

Known as the king of classic dim sum, this is a Chinese dumpling wrapped with shrimp inside. There are so many qualities that define this small dish that the skill of a dim sum chef can be determined by how well this dish is prepared.

For example, the translucent skin of the Har Gow must be thin and clear enough where you can see the succulent pink shrimp inside but not too thin where it breaks when picked up by chopsticks. If it is too wet, it’ll most likely be too sticky and weak where it’ll break, too dry and it’ll not look or taste too appealing. With so much to talk about with just the wrapping, it’s easy to see why there is so much emphasis on this dish in the world of dim sum. If Har Gow is the king of dim sum, the queen is Siu Mai. These two dishes are pretty much default orders when having dim sum.

Wrapped in a thin yellow coat, dim sum Siu Mai is usually made with pork, sometimes shrimp is added to the mix. To garnish, many restaurants decide to use roe to add a little orange pizzazz. This dim sum dish is so popular that it has made a leap to street food as well. However, there are differences in taste and quality as street food Siu Mai is much smaller in size and is usually made of fish paste, much like imitation crab. Literally translated as radish cake, this item is made with rice flour and finely shredded radish, and come in squares. Depending on the restaurant and the quality of the cake, savory ingredients such as dried shrimp, ham, and shitake mushrooms are added to give it a mouthwatering taste.

As the name suggests, this dish is very soft like a cake, but the outside is usually lightly fried so that you can pick it up with chopsticks and also gives it another layer in terms of texture. It is often served with chili oil or paste to enhance the flavor.

These soft and white tightly wrapped rice noodle rolls get their name of “pig intestine noodles” from their close appearance to a pig’s small intestines. But that’s about as far as the namesake goes.

These delightful rolls can be eaten plain or with a variety of filling like shrimp and cha siu (Chinese barbecue pork). Since these rice noodles do not have much flavor, you’ll see it served often with soy sauce – depending on the restaurant, it could be a sweet or salty soy sauce. This is another dish that has made it into the street food scene where it’s slathered with soy, hoisin, peanut, and hot sauces then topped off by sesame seeds. With a fierce name like “Phoenix Claws,” you know that this dish is not for the faint of heart.

While many people will not try chicken feet, this dish is usually heavily spiced with black pepper and is colored red – kind of like a phoenix. Don’t knock it ’til you try it though! With bao (bread) being an integral part of dim sum, the phrase “drink a cup of tea, eat a bao” is a way to invite friends to have dim sum with you and catch up.

One of the most well-known bao dishes to eat while having dim sum is cha siu bao. This dish is made with Chinese barbequed pork (cha siu) and has a sweet-savory flavor to it. Traditionally, this is a steamed bao characterized by its fluffy white appearance, but recently the baked version has come up to be on par with the classic. New twists on this dish include putting a pastry top on the bao, creating a flakey texture to complement the soft bun. Another popular bao dish is lai wong bao. This is one of my go-to desserts whenever I take Westerners to dim sum, because they all seem to love it! Filled with custard, this sweet treat also has gone through some changes throughout the years. Some restaurants are now introducing a kind that is more liquid-y (and more… delicious-y?).

This version is called lau sha bao (流沙包) for its similarity to flowing sands. Be careful though as it is very easy to burn yourself on the hot liquid filling as it gushes out!

This steamed meatball has a wide range of ingredients mixed in to give it a great flavor – minced meat, water chestnuts, and sometimes coriander or scallions. Steamed with a tofu skin, this tender meatball is usually served with a Worcestershire sauce to give it a slight vinegar taste. This sticky rice item is steamed with a lotus leaf to give it an extraordinary fragrance and taste. The insides of this sticky rice contain a myriad of ingredients, often including some mixture of: chicken, pork, shitake mushrooms, Chinese wax sausage, dried shrimp, and egg. This dish is not found in all dim sum restaurants, but if you see it, this is definitely a must try dim sum item at the end of your meal! With a sweet flavor and fragrance, osmanthus jelly is the best dessert and palette cleanser you can find. Aside from its refreshing taste, it’s also said to have health benefits.

Healthy dessert? Count me in! What are your favorite dim sum dishes to order?