If you are not quite familiar with Japanese kitchen knives, the names Santoku and Gyuto will probably sound strange to you. Even an expert with knives that knows the different kinds of steel and the various edge grinds, might have never come across these Japanese knives before.

Don’t worry, they are knives that can be used in any kitchen, it’s just that there are some variations between them and popular western knives but they can as well cut, slice, mince, and dice like western knives.

These two Japanese kitchen knives have many similarities but they also have some variations when carefully studied comparatively. We have compiled a list of these differences in this article. But let’s first get to know a little about these knives individually. 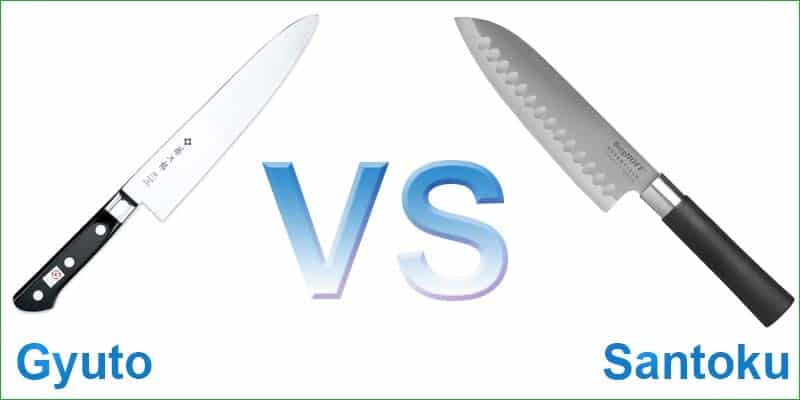 What is a Santoku Knife?

The Japanese word Santoku is literally translated to mean “three virtues”. This implies that this knife can be used for dicing, mincing, and chopping. It is a multipurpose knife which can be used to cut meat, fish, and vegetables. Most times they are shorter than chef knives that are long.

They have flat, wide blades and slightly rounded or fairly blunt tips. The straight long blade of this knife is specifically useful for long cutting strokes. Also, the wide blade of the Santoku knife helps to transfer food from the cutting board into a pot or bowl. This knife generally looks large.

What is a Gyuto Knife?

The Gyuto knife works like a Traditional Western Chef’s Knife. In the Japanese language, the word means ” Cow blade” because it was first used to cut meats and fishes. However, nowadays it works well as an all-purpose knife. This knife is also suitable for rock cutting of fruits and vegetables because the edge of the knife curves gently towards the tip.

Japanese Gyuto knives are lightweight and they perform precision work well such as mincing proteins and vegetables. They also have enough height that allows your knuckles to have a spaced surface contact as you chop.

The differences between a Santoku and Gyuto

If a Santoku and a Gyuto knife are placed side by side, many similarities can be easily spotted in them. But there are still differences in them that inform which cutting activities they would be best suited for. Below are some of the characteristics that distinguish them. 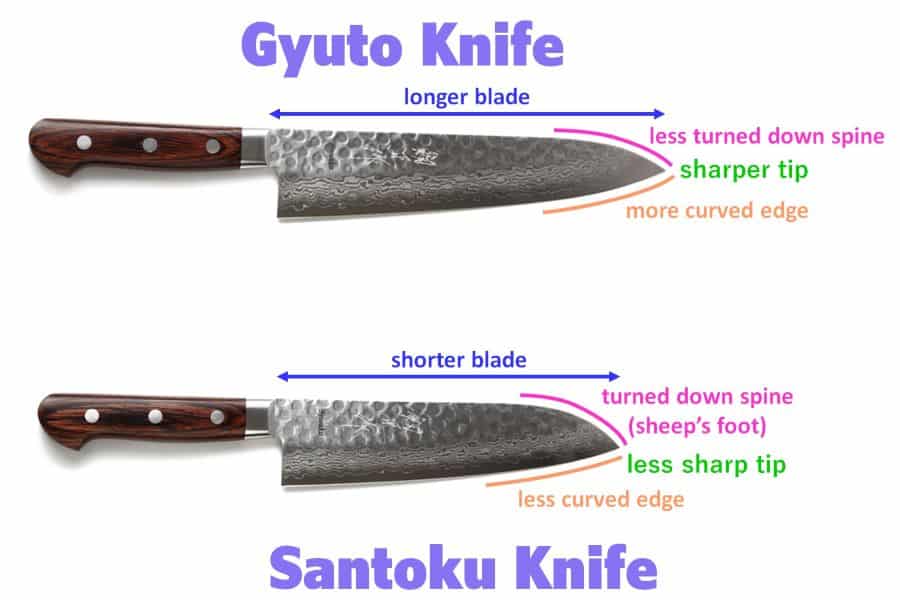 1. Origin of the knife

The Gyuto knife actually originated from either France or Germany, but they were imported into Japan and Japanese craftsmen started making them. The knife was first used for meat handling. While the Santoku knife originates from Japan, it’s based on a Japanese kitchen knife called Nakiri. It was first used for vegetable handling.

They both have similar shapes. If you aren’t familiar with these knives, it will be difficult for you to distinguish them. But there exist a few slight differences.

The spine of a Santoku that tends to be turned down is also called a sheep’s foot tip or blade. The tip is a bit less sharp and the edge is relatively flatter. These qualities make the knife more suitable for straight vertical chopping of vegetables.

Theoretically, a Santoku or Gyuto knife can be made with into type of blade length. But generally, it is hard to find any Santoku knife blade length having more than 180mm (7 inches). However, a Gyuto knife’s blade can be as long as 300mm (11.8 inches).

Santoku knives have a shorter blade length range because of the coziness of Japanese kitchens. Many Japanese kitchens were not spacious enough to have kitchen knives with long blades. It is often said that knives that are a bit shorter than your chopping board’s width can be handled easily.

If the length of the blade of both knives were the same, the weight of the knives could be comparable. But because the blade of the Gyuto is longer than that of the Santoku, there is a general notion among people that the Gyuto knife is heavier.

Some people believe the Santoku knife is better for performing tasks that require chopping down motion. And the Gyuto knife is more suitable to be used for a forth-and-back rocking motion. This is as a result of the differences mentioned above. But the differences might not be noticeable for some other people.

Santoku kitchen knives are less expensive than the Gyuto kitchen knives most times. So, if you would love to have an additional all-purpose knife to your collection of kitchen knives a santoku knife could be a better choice instead of a Gyuto knife.

7. The structure of the knife

The tips of a Santoku knife are fairly flat. This implies that it is harder for the knife to be used to start a slice or a cut by using the knife’s tip to start cutting. Also, Santoku knives unlike Gyuto knives have no belly or curve. Therefore, they can’t be used to perform knife techniques which involve rocking of the blade forth and back. 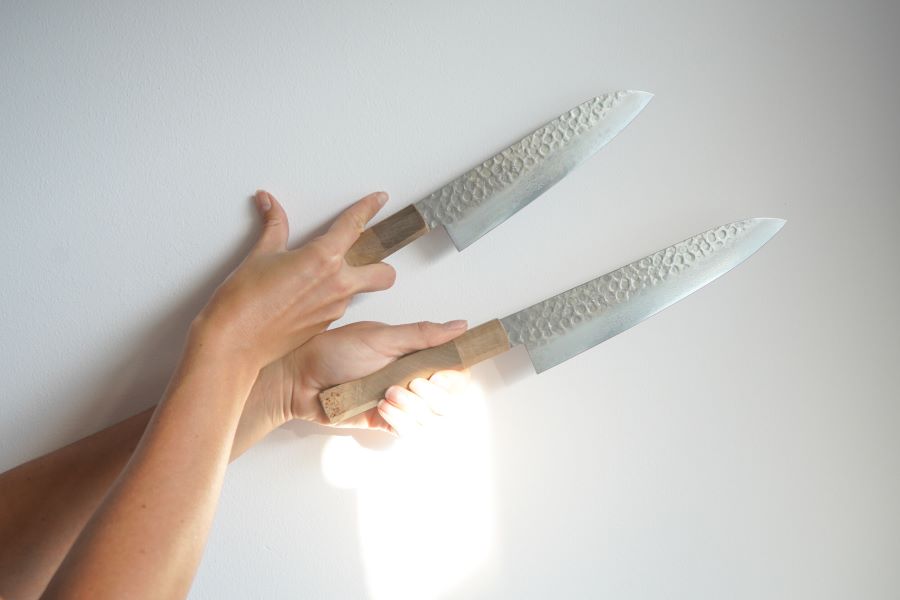 Also, the differences are either more or less pronounced depending on the various brands and makers of these knives.

If you are interested in getting an all-purpose Japanese kitchen knife, either of these two knives is a good choice. But if you desire some guidance on which one better suits your kitchen needs, their differences highlighted in this article will guide you as you choose one.