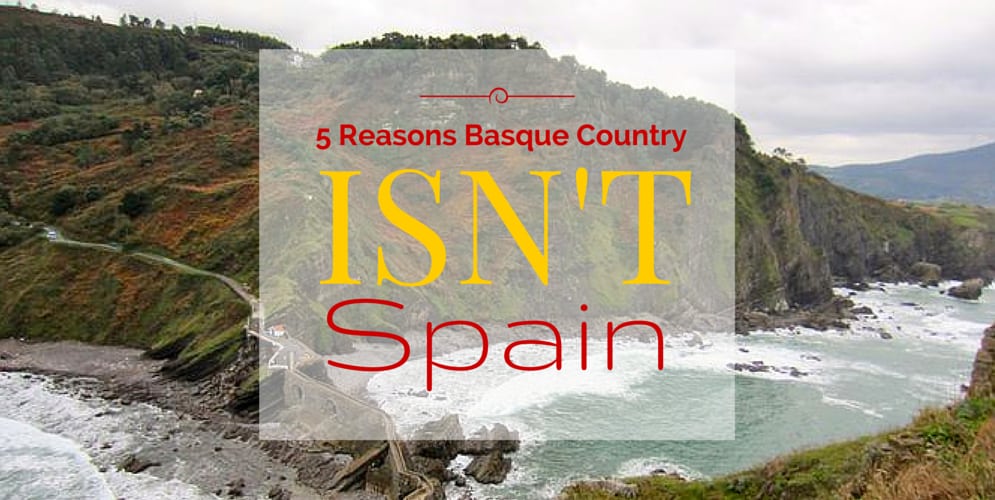 Today’s post comes from the lovely Jenny Marshall, who you may remember as one of this month’s featured bloggers.

Jenny is a language and culture fanatic. She’s originally from California but has lived for three years in Spain, now based in Barcelona. She teaches English to fill the bank, writes to fill her soul, and attempts that sexy Spanish lisp on the day-to-day. Jenny can’t decide which is more fun, travel or grammar, so she writes about their intersection at her language and culture blog.

Basque Country sits quietly, unassuming, on the northern coast of Spain, a relatively tiny region bordered by the Bay of Biscay that stretches across the Pyrenees into France. It is home to the posh and ultra-popular San Sebastian, a beach resort city that needs no Instagram filter. To the west, Basque country’s most populous city, up-and-coming Bilbao, boasts the Frank Ghery-designed Guggenheim museum. Its glistening, fish-like exterior is a work of art in itself, but its modern exhibitions still have me scratching my head. Basque Country is not as well known among tourists as Seville, Barcelona, or Madrid, but it’s arguably the most stunningly beautiful and gastronomically rich region of all of Spain. Except, er, it’s not Spain.

At least the locals don’t want it to be.

You see, the Basques have been fighting for their independence from the Spanish State ever since dictator Francisco Franco died and democracy was restored in 1975. Although he was horrible throughout the country, Franco was particularly ruthless in Basque Country. He allowed Hitler to test his bombs in the small town of Guernica (the destruction of which inspired Picasso’s famous painting). He forbid the use of the local language Euskara (Basque), forcing many who knew no Spanish into silence, and any typical Basque music or dance was effectively banned. Franco wanted one unified Spain, and the Basques didn’t fit into his mold.

So it’s understandable that today, many Basques are calling for independence from a country that for so long repressed its unique culture and customs.

But even apart from politics, if you visit Basque Country during a trip to Spain or France, you’ll notice it’s simply different. A far cry from the typical Spanish white-washed houses and Flamenco images that you see in postcards or films, Basque Country’s physical and cultural idiosyncrasies make one wonder if they truly are in a different country.

Here are five that stand out: No one comes to Spain expecting rain. But they’re in for a real surprise when they head north. A stark change from the dry plains and olive plantations in the South, Basque Country experiences about as many rainy days as England annually. As a California girl, it was a rough transition. I got to experience buying a coat for the very first time. But the plus side of all that rain is the resulting verdant landscape—which you can ooh and aww over while seeking refuge under awnings or in cafés.

Basque Country boasts mile after mile (or kilometer after kilometer) of rolling hills and larger mountain ranges. The brain must release serotonin upon catching sight of rolling hills—otherwise, why would they make us so inexplicably happy? (Or maybe that’s just me.) As an added treat, the Basque hillsides are dotted with grazing sheep and goats—it doesn’t get much more bucolic than that. In the East you approach the Pyrenees mountain range; as you drive west to the neighboring region of Cantabria you come upon the Picos de Europa. It’s no wonder all the Basques own intense hiking and climbing gear, and don’t fear the trails even in all that rain. 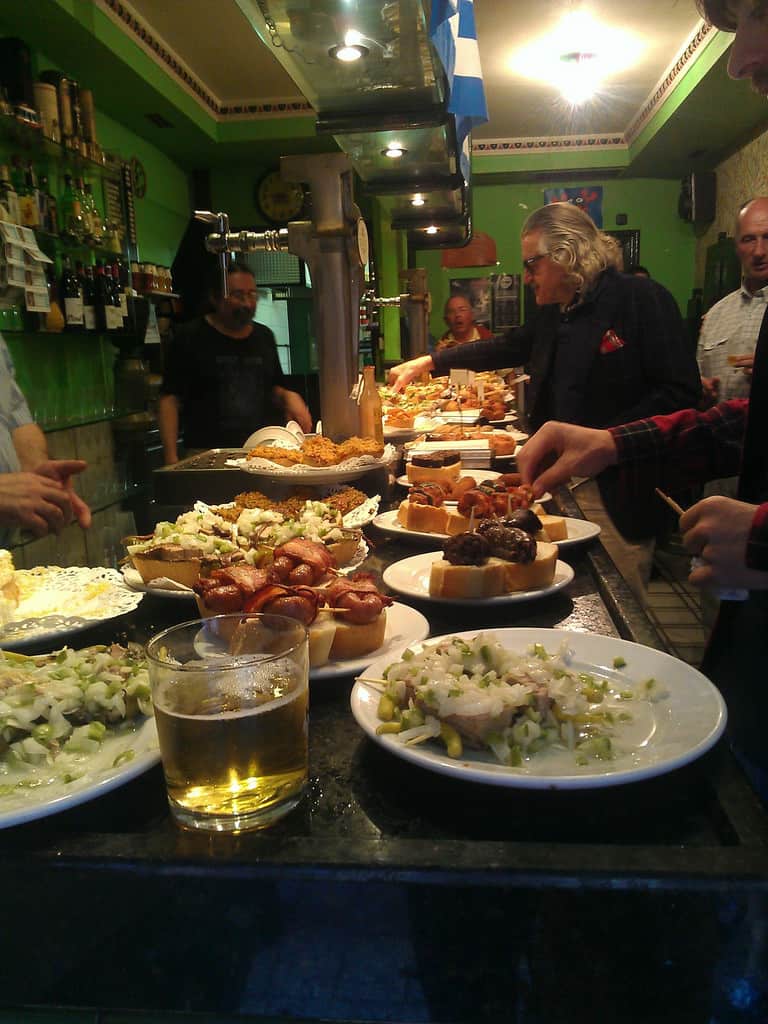 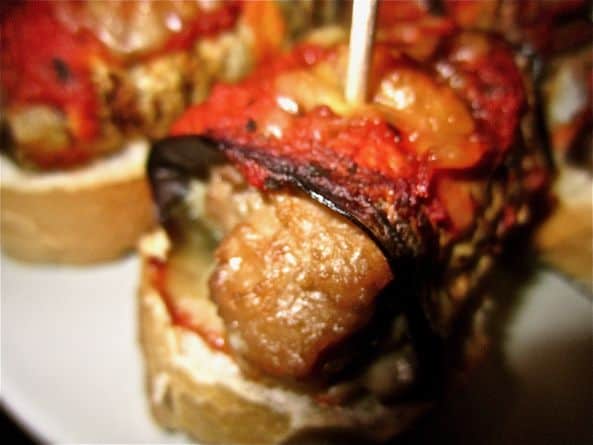 Similar to the rest of Spain, Basques are undeniably proud of their cuisine. But Basque specialties aren’t the same as Spanish ones. Don’t come to a bar up here and order sangria—they’ll laugh you all the way back to Andalucia (or at least grimace while serving you). Instead, try Basque cider, a fermented juice that is far less sweet than its English counterpart, and traditionally poured from a spout several feet above the glass to aerate the drink. Txakolí is the regional wine, a crisp dry white made from grapes grown in Basque Country. And you won’t find tapas too easily in the northern region; instead, pintxos are common, bite-sized delicacies typically served on a slice of baguette and seared with a toothpick. The most famous pintxo capital is San Sebastian—home to the most Michelin starred restaurants per capita in the world—where you’ll come across bars with counters laden with thirty distinct varieties of pintxos. Just point to the ones you want, and the waiter heats them up for you. Then, you pay by the toothpick!

I mentioned before that Franco suppressed the use of Euskara (“Basque” in English), the local language of the Basques that predates Indo-European languages, and is unrelated to any living language on Earth. A common misconception is that it’s a dialect of Spanish, but in fact, the two share no roots. The origins of the Basque language are a mystery, and it’s said to be one of the most difficult languages for English speakers to learn. It’s littered with x’s, k’s and z’s, and can be an absolute headache to decipher: Take a popular hike along the Basque coast to a hermitage known as “San Juan de GAZTELUGATXE,” and you’ll get my point. While Spanish is slightly more common in the larger cities in Basque Country, Euskara is much more widespread in the smaller villages. Some children don’t even learn Spanish until they go to school. As a teacher in Bilbao, I had quite the time trying to memorize the Basque names of my 300 students: Gaizka, Ziortza, Ingartzi, Orkatz . . . There was one poor girl named Jenny that I must have called on 90% of the time. For more on Basque (Euskara) Basics, check out this post.

Ask a Basque, in particular one from Bilbao, which of Spain’s two big soccer teams they root for—Barcelona or Madrid—and they will cast you a look of disgust and shout, “Aupa Athletic!” Athletic Club is Bilbao’s team, ranked 12th in the league this year (but 4th the year I was there! Aupa Athletic!), and Basques go crazy over the matches. And not just because they love their football, as do most people across the Iberian Peninsula. Athletic Club is particularly praised because it only contracts players from the Basque region, which is a huge point of pride. Basques are rejecting Spanish players (and by affiliation, rejecting the country they wish to separate from), or players from other countries (think Renaldo from Portugal) and are still one of the top teams in the league. On game days, a sea of white and red heads to the bars and stadium—much like in any other part of Spain—but there is an added element of independence, of solidarity, knowing that these players were born and bred in Basque Country and their skill represents the potential of the region.

Of course, Basque Country is still presently part of Spain, and it still retains a Spanish feel—late meal times, stores shutting down for three hours mid-day, an emphasis on family and enjoying life, a great appreciation for cured ham. But you’ve been warned; don’t go to Basque Country looking for Flamenco and Sangria. Instead, be open to a whole other trove of treasures.

If you didn’t get a chance to get out her blog A Thing For Wor(l)ds, go and do that now. Or, if you want to know more about Jenny you can check out my interview with her!